We woke up really early @ 4:00am – to cat h our flight out of Barcelona to Granada leaving at 7:00am.   Out cab driver was really nice, once Chris uttered a word in Spanish, they were full-on, talking in Spanish about ???  Chris later told me that the driver is originally from Venezuela – and as the conversation progressed, his Spanish was changing from Castilian to South American.  Karina and I noticed, Chris was speaking three time more in Spanish, at shotgun speed- sounded very legit! BCN is a rather new (current airport was built only 3 years ago), modern airport.  Everything was running pretty efficiently- and again, if you are wearing flat shoes, sneakers, Uggs, or ones with no metals, you do not have to take your shoes off – but iPad had to come out of your bags.  We arrived  85min prior to our 7:00am departure, had a light breakfast.  We were supposed to go to the gate around 6:30am at B39.  Of course in 30 min time, they changed our gate.  BCN does not announce gate changes either.  We had to RUN from B30 to A20 at 6:28am as the reader board was showing “last call” next to our flight.  I could not understand why they were closing the gate 30min before the flight…. Then just at 6:30am as we arrived the gate… I noticed, our plane is not at the jetway….we were to be bused to the middle of the airport for boarding.One thing I learned….Vueling is pronounced voo-eh-ling, not view-ling.

Granada Airport is just as tiny as Yakima, or Leeds, UK.  No jetways….all ground walking.  So much for wheelchair people.  I was wondering what kind of scene our Greek Old Lady would make……

It was very chilly (at 3C) when we arrived at GRX at 8:25am.   Since we had sooooo much time, we took Airport to City Center bus (3 euro per person), instead of taking taxi.  The bus stops right next to the Cathedral, and our hotel is only 3 blocks away.  Our home for the next 2 nights – Hotel Ana Capri is a really nice 3 star hotel at winter bargain price of 136 euro for triple room!!! Again, three twin beds!  And they had our room all ready at 9:30am- we could rest a bit before heading out for Old Granada walk. 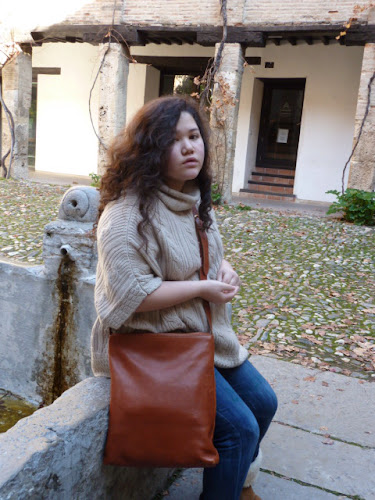 We walked through the old Arab market, first greeted by a few gypsy women, trying to hand us some twigs of unknown plants.  As walking through, it felt like we transported to Turky already….all these trinkets, lots of sling shots,   The only reminder that we are in Spain was framrnco dressed hanging at store front. 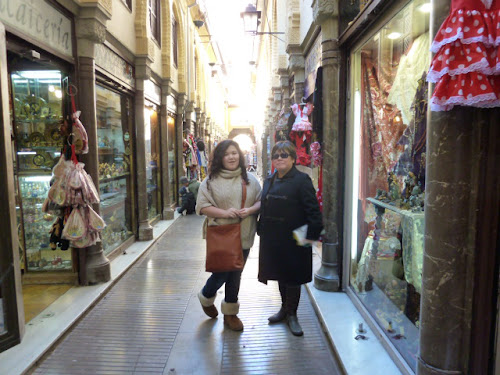 We reached the side of the Cathedral, where it used to be the important square during Moorish time, with school etc.  Now there are these buildings with tromph de l’oeil which is really charming. 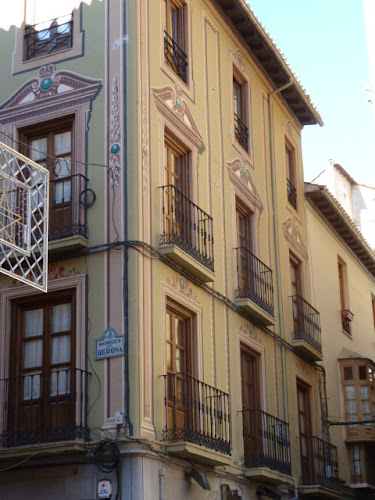 We went inside the Royal museum housing artifacts from Quee. Isabelle and Kind Fernando.  Very small museum with her collection of painting– only those that were not take by dear Mr Napolen remain here.
We were not allowed to take pictures inside Royal Museum nor inside museum of Cathedral (- and I wasn’t going to repeat the Kindergartener incident…..)
The  Cathedal is MASSIVE – not because of religious presence – but the size, the ornate detailing, just over-the-top “catholic king and queen are so wealthy” ego-show off……reminds me of our Medina….
So much so that sculptures inside the Cathedal are not angels or saints…. It’s Don Quixote-like soldiers…… 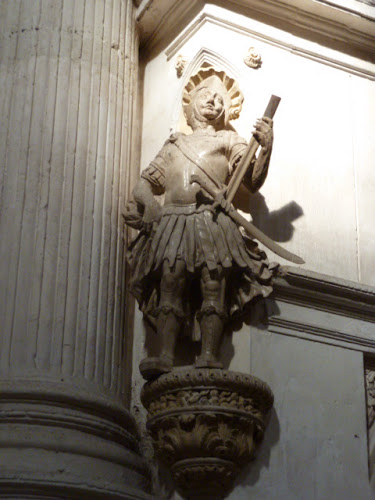 After walking around very manageable Old Granada, we hurried to our 2:00pm appointment at Arab Hammam…for 90min soaking and 15 min massage.  Again, it’s Photos-No for obvious reasons… The place had old, warm, and hot pools…. Steam sauna….. And my massage guy had very large, strong hands, perfect for my stiff neck and back. 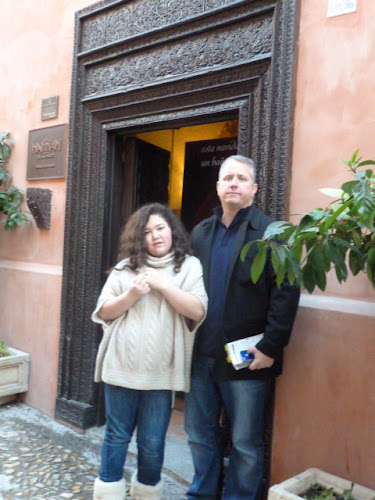 After 2 hour of relaxation, I herded Chris and Karina for walk up to St Nicholas viewpoint – total walk of 90 min by the time we were back in hotel.  Karina was very unhappy…. 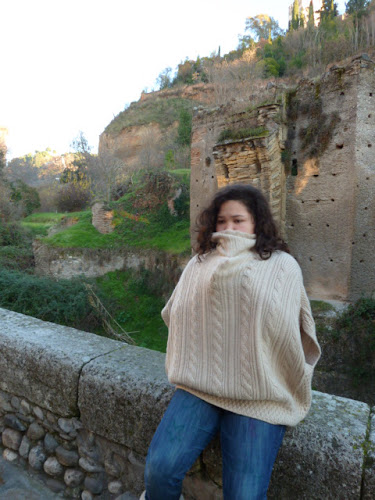 We were rewarded by a magnificent sunset view of Alhambra……. 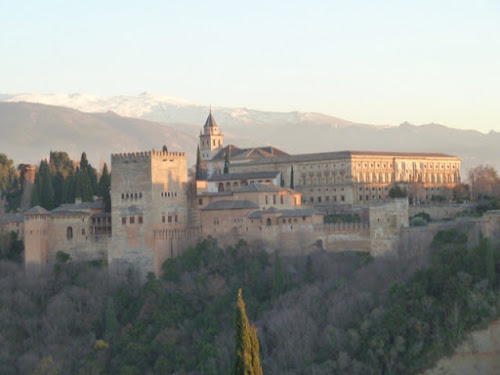 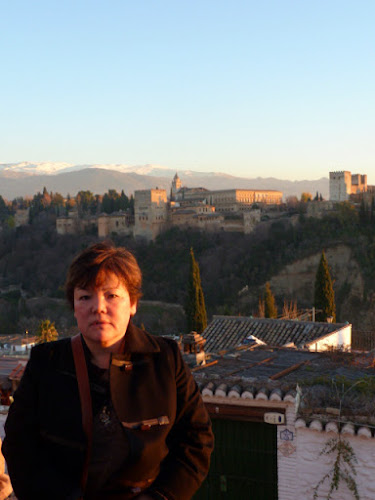 And yes I was a bit tired to smile….. Well it’s mostly because those gypsies were using dogs to make money…..cute doggies come to you, freeze-pose for attention =. €. I don’t like dog-slave….. 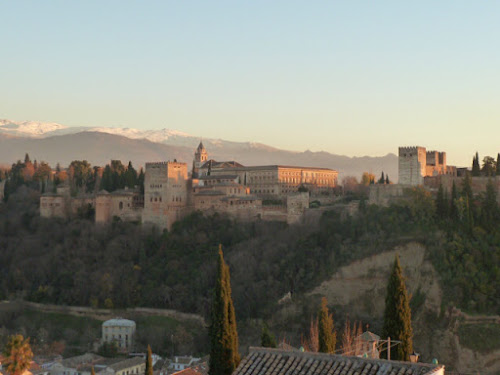 Another view of town- taking a wrong way back that we could see all because we mistakenly took really long way back….. 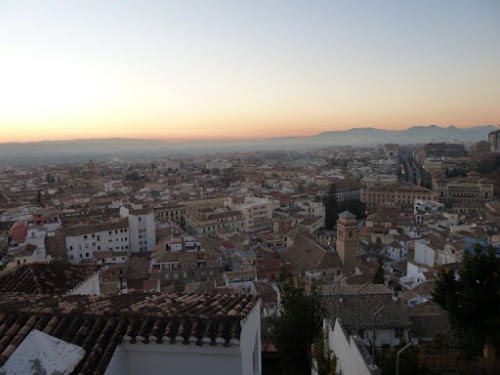 Now, getting ready to go to dinner…. Where we will have The View of night-light Alhambra…….Carmen Miradoe de Aixa!

Send Us a Message

Posted in From our Agents